Though to most visitors, Pui O is little more than a village with a beach, plus buffalo roaming abandoned fields, it is also among Hong Kong’s best birdwatching places.

This is chiefly because the abandoned fields tend to be marsh, with areas of goopy mud and grass churned by buffaloes’ hooves – and attract a variety of freshwater wetland birds, including species that are regular at only few sites across Hong Kong. 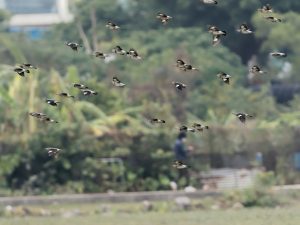 While some of these are “birdwatchers’ birds”, like small brown warblers that skulk amidst the vegetation, there are also readily seen species. Cattle egrets, for instance – pretty much any time you visit, you should see some of these small white herons, probably keeping close to water buffalo, which might scare up grasshoppers and other juicy morsels. 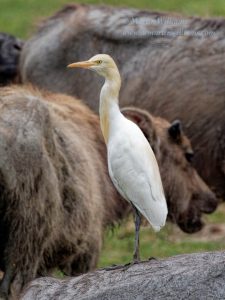 Usually, there are buffalo and cattle egrets near the road to the beach. But finding most birds requires walking some of the paths between and alongside the old fields. Turn right at the end of the beach road, follow the sandy track above the shore, and there’s a footpath towards the marshiest area, which tends to be most rewarding for birds. 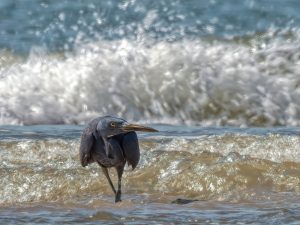 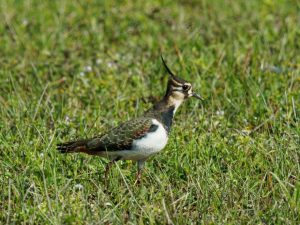 This passes an area that’s become an unofficial campsite in these Covid times, and so disturbed it’s almost birdless. So ignore this, and pay attention to the grass and marsh on the right and up ahead. If there are more cattle egrets, notice they have yellow bills, and splendid ginger necks if in spring breeding plumage. You might also spot a little egret, distinguished by its black bill, or a great egret standing much taller.

Songbirds forage here, too. Wagtails bustle around in the grass, seeking small insects. White wagtails are black above, white below; while yellow wagtails are greyish during winter, gaining smart yellow underparts as spring arrives. Crested mynahs are chunky birds, mostly black but with blazing white wing patches in flight, often striding around beside buffaloes or even perching on their backs. In winter, you could also see a roaming band of red-billed starlings, with tens of birds dropping onto a patch of grass to feed for a few minutes, then flying off to try their luck nearby.

There are other birds too, of course, mostly more easily seen with binoculars than the naked eye, such as common teal – small ducks – that favour puddles by a fenced patch of empty land. And there are other places to investigate. 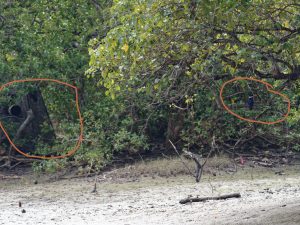 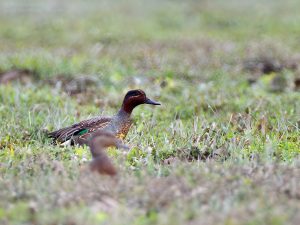 For instance, try further east, along the mouth of the main creek. Try the concrete path along the west bank, from the road bridge in Ham Tin. Expect more egrets here, along with one or two grey herons that are likewise expert fishermen. With luck, you might also find a brightly coloured common kingfisher, or even one of the larger black-capped kingfishers that have graced the creek mouth this winter, attracting photographers with mighty camera gear. These are among Hong Kong’s most exotic birds, with royal blue upperparts, black caps and large red bills making them appear like cartoon characters brought to life.

Pui O can repay further visits, partly as you learn more about the birds and best places to find them, also as migrants such as sandpipers stopover during spring and autumn migration seasons. 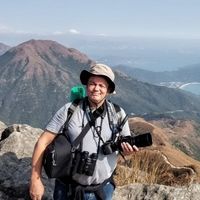 Martin is a writer, photographer and videographer. Originally from the UK, he lives on Cheung Chau, and often visits Lantau to hike and watch birds. www.drmartinwilliams.com

PrevPreviousHealing through Self-Compassion
NextNeed clarity for the year ahead? Find it with a Tarot Card readingNext

Easy for you to Say – A Speech Screener Storybook

As with so many things in life, screen time – for both ourselves and our kids – is all about…

Get To Know Us 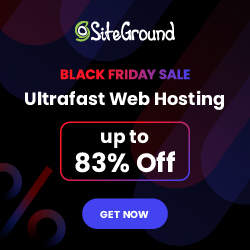 Whether just setting out as a start-up, or looking

How do you achieve healthy skin? Do you choose ski

Get the latest news and promotions